On 21st April the XVIII Europadel Trophy took place in the wonderful facilities of the CIE in Overijse, this time it was a special tournament because the goal was to help an humanitarian project in Kenya   http://www.gam-asbl.com/

Our well-known member Felix Moreno Diaz , captain of the Europadel team for the Tournament Interclubs 250, was also the director of this tournament. here you have the original poster of the tournament designed by Felix’s daughter. 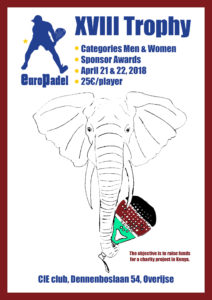 16 committed player fought strongly in the 2 padel courts of  the CIE with a wonderful sunny day. Special recognition for Elena called “the octopus” as the only woman of the trophy. Bravo Elena !!! 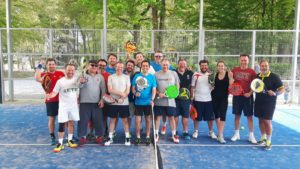 The winners of the trophy were Carlos Martin “the Hammer” and Emilio Camba “Gigi” which defeated the team composed by Nicolas Tilmant and Francois Gerard in a very tough match decided in a super tie-break after two sets.

The “petite final” was won for the controversial team Miguel Angel Romero and Alfonso de la Fuente they are called “the robaperas”, they defeated the team formed by Francisco Tristante and Rafa Perez 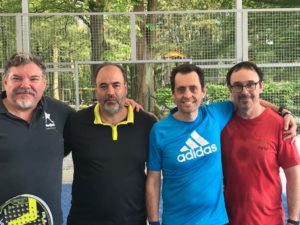 That’s all friends, Felix promised that next year will be another tournament and all of us are very happy to help to this proyect . VIVA KENYA and VIVA EUROPADEL

GREAT DAY OF PADEL IN ARLON (BELGIUM) ON 5th MAY

No Replies to "XVIII EuroPadel trophy – charity trophy in favour of Kenya - A GREAT SUCCESS !!"