This year 2016 we have organized our 4th Europadel tournament in Gent, and like the previous ones, it has been a complete success.

Each year we are getting better and better and we wish to going on and on ………….

The third place went to María Treviño and Curro from EuroPadel which won against Sonsoles and Emilio in the “petite” final in a very hard and tight match. María received the annual special prize of Europadel to recognize all the work she has made to promote padel in Belgium. Congratulations María and thanks a lot for all your work.

Two another circumstances must be underlined, the first was the challenge match between Padel 4U2 and EuroPadel which took placed Saturday evening after the victory of Belgium against  Ireland in the European Football Cup  3-0.  This year again Padel 4U2 won or even destroyed EuroPadel team (Curro and Emilio) :-(. But there were serious doubts about the performance of a player of Padel 4U2, Jan Bonnarens which played too well (even better than Nick) !!!!! Next year there will be anti-doping test, at least for the challenge match.

The wheather this year was not so good, at least, Saturday but Sunday was fantastic, and given the quality of the padel courts of Padel 4U2 we could complete all the matches without any problem; specially thanks to the players which demonstrated a commendable sportive spirit, fair play and friendship approach.

The second point to be highlighted was that Saturday morning during the rain two sun’s rays unexpectedly  appeared in the club in the form of volley players. As a consequence, next year another challenge has to be organized, a volley match between Padel 4U2 and EuroPadel, I will be together with Alfonso the trainer for EuroPadel and We have already two players in our team !!!  Good luck Padel 4U2 ! 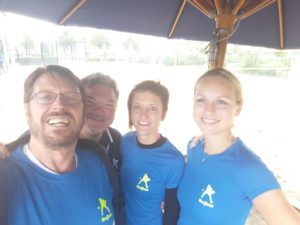 The tombola was a big success as usual, we would like to thank once again all our sponsors Air Europa, La Casa Escrivá, Vin de mois, Bullpadel, Alfonso Escubos, BBVA,  Bois Savanes, Casa Asturias, Terras Gaudas, Finca Can Ramón, Ghent River Hotel and Spyke for their generosity and commitment with Padel !

Here you can find the link to the album with the pictures of the trophy (Thanks a lot Sandy !!!)

No Replies to "XIII Europadel Trophy - story of a friendship"

Got something to say? Cancel reply